Karnataka is home to a rich and vibrant collection of art forms. While most of them, rooted in the local folklore and customs, portrays a combination of percussion, dance, and drama, some others even showcase elements of mysticism. These ethnic art forms are performed during particular seasons and not always throughout the year, hence plan your travels accordingly if you want to experience them. Curated below is an elaborate list of Karnataka’s art forms that will help inform you better about these Karnataka culture experiences.

Beesu Kamsale is a dance form closely associated with the rituals of Male Mahadeshwara worship, and employs a great blend of aesthetic sublimity and martial agility. A cymbal like disc, the ‘Kamsale’, is played in rhythm with the songs exalting the glory of Lord Mahadeswara.

A harvest festival dance, Suggi Kunita is performed mostly by the farming community. Artists in beautiful costumes adorned with a wooden headgear, carved birds and flowers, dance and at times sing along to the tune of drums, with sticks and peacock feathers in their hand.

Ummathat is the traditional dance form of Coorg made famous by the beautiful Kodava women. Adorned in the traditional red brocade saree, jewellery and red vermilion on their forehead, they dance in circles to the rhythm of hand-held brass cymbals. Accompanied by singing, the dance form – performed to appease goddess Cauvery – is usually part of festivals, weddings and other occasions.

Puja Kunitha is the dance performed to propitiate goddess Shakti. The dancer carries a five feet high frame made out of bamboo called Puje on the head, which is wrapped with beautiful sarees and flowers, during the performance. Devoid of any storyline, the dancer is allowed to go with the flow while presenting acrobatic movements.

This traditional folk theatre form revolves around Lord Krishna, and his fight with Indra over the Parijata tree. Known for their frequent witticisms, these are mostly open-air performances. Simple plots and dialogues, spontaneity of the performers and impromptu improvisations make Krishna Parijatha enjoyable for the audience.

A large percussion instrument made from the wheels of a bullock cart, wrapped with buffalo hides called ‘Jaggahalige’ is used in this folk art of karnataka culture. Usually involving about 15 people, the dancers march to the pulsating beat of giant drums. Jagghalige Kunitha is performed during festivals like Ugadi and Holi.

The devotees of Yellamma, the patron goddess of the rural folk of North Karnataka, perform Chowdike Mela. ‘Chowdike’, a unique stringed instrument, is played to praise the goddess. The singers usually dedicate their entire lives solely to singing the heavenly glory.

Somana Kunitha is a religious, ritualistic dance performed by two or three artists adorned with elaborate masks. Stories related to the birth of the Somas; were entrusted with the task of guarding the village deities and worshipping them, form the crux of the performance.

This religious dance is performed by the devotees of Shiva, the Hindu god. Attired in fur caps made from bearskin, and black and yellow clothing, they sway to the mystic tunes of the flute and the ‘Damaruga’, a hand-held drum. Karnataka Culture accompanying their trance-like movements, are songs handed down through generations, embodying deep spiritual meanings.

Veeragase gets its name from the Hindu legendary warrior, Veerabhadra. Dressed in colourful garb and traditional headgear, the dancers carry a wooden plaque of Veerabhadra in their left hand and a sword in their right. The dance sometimes involves a ritualistic piercing of a needle across the tongue.

A trip to the coastal belt would be incomplete without watching the Yakshagana – an elaborate dance drama performance unique to Karnataka Culture. It is a rare combination of dance, music, song, scholarly dialogues and colourful costumes.
A celestial world unfolds before the audience, as loud singing and drumming form a backdrop to dancers clad in striking costumes, hence the name Yaksha (celestial) Gana (music). This is a night-long event, with elaborately adorned performers dancing to the beat of drums in open-air theatres – usually by the paddy fields after the winter crop has been harvested. Traditionally, men portray all roles, including the female ones, though women are now part of Yakshagana troupes.
A typical troupe consists of 15 to 20 actors and a Bhagavatha, who is the master of ceremonies and the main story teller. The performances draw crowds from far and wide, with a fair- ground atmosphere pervading the venue till dawn.

The Bhootha Aradhane or devil worship, is very common in the coastal towns of Karnataka. Idols representing ‘bhootha’ are taken out in a procession accompanied by the beating of drums and firecrackers. As the procession ends, the idols are placed on a pedestal. With a sword and jingling bells, a dancer whirls round in imitation of the devil he represents. Frantically pacing up and down, he enters into a possessed state and acts as an oracle.

People of Dakshina Kannada perform an elaborate ritual called Nagamandala to appease the serpent spirit. It is conducted in an extravagant manner throughout the night, wherein dancers known as the Vaidyas dress themselves as nagakanyaka and dance the night away. The Vaidyas cavort around an elaborate serpent design drawn with natural colours on the sacred ground in a pandal, specially erected in front of the shrine. This nocturnal ritual is performed between December and April.

Food Cuisines During Monsoon In Karnataka

Best Places to Bicycle in Karnataka 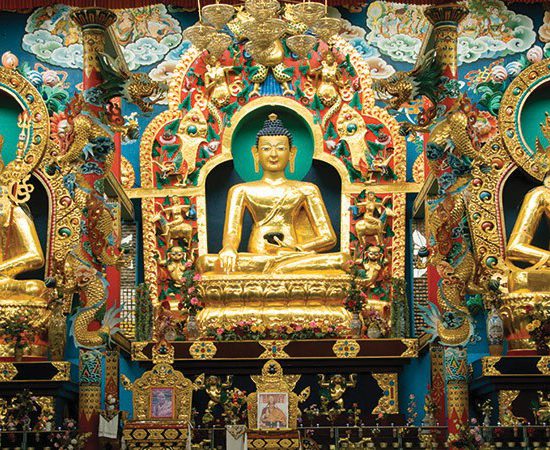