Places to visit in Karnataka this Christmas

Home  /  Blog   /  Places to visit in Karnataka this Christmas 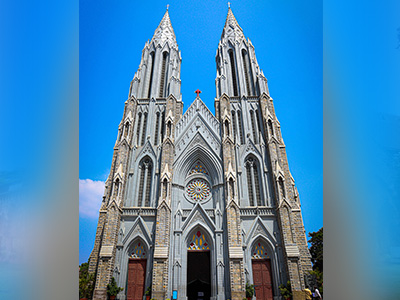 Places to visit in Karnataka this Christmas

And the season is here! A festival celebrated across the world as a season of joy and happiness. The whole world is in a holiday mood and wants to travel to places for a holiday, to meet and greet loved ones or find a getaway to escape from the hustle and bustle of the city to a quaint getaway for relaxing and rejuvenating.
The fragrance of cakes and wines, the brightly shining stars, captivating lighting, ornate Christmas trees, crisply wrapped colourful gifts, melodious carols, Santa on the streets, and the joy all around – nothing can beat the overwhelming spirit of Christmas. Christmas in Karnataka too is celebrated with the same joy and zest but with its flavours.

Like any other destination, Christmas is celebrated with the same pomp and show and joy all over Karnataka too. Churches and streets are lit with bright twinkling lights, massive decorated Christmas trees are placed in malls & hotels, the city bakeries are smelling divine with cookies and plum cakes, and aromas of mulled wines make the season, the season of festivities and is celebrated till the welcoming of the New Year. Although Christmas is celebrated across Karnataka, there are a few places or churches one must visit during Christmas time.

The blend of traditional and contemporary, Bengaluru has some of the best and most ancient Churches in the state. These churches are significantly popular with all those who are celebrating Christmas. The fragrance and the vibes of the festivities are felt all over the city. The beautifully decorated city with colourful lights and stars attracts many tourists. The Silicon capital of India celebrates the season of Christmas and New Year with great joy. Although each Church is filled with the joy of carols and masses, there are a few which are visited the most. 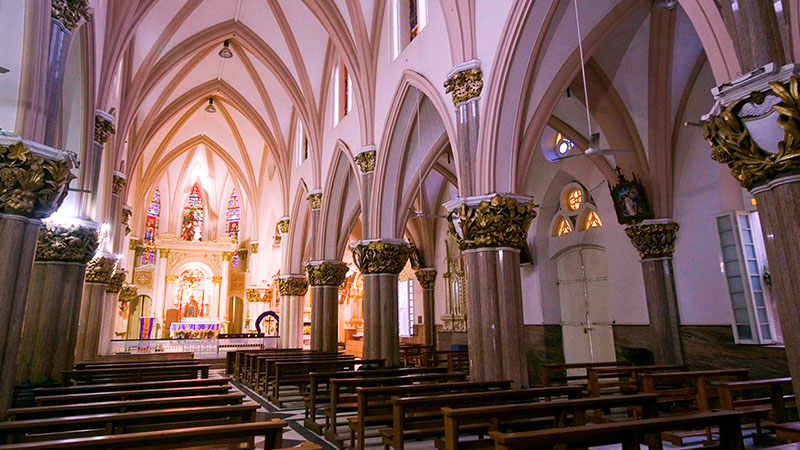 Originally built as a chapel in the year 1818 then later transformed into a church in 1874 in a beautiful gothic style, St Mary’s Basilica has remarkable interiors stained-glass windows, and splendid arches. Located in the heart of the town, the church is believed to have miraculous healing powers and the mother is known as Lady of Health. The beautiful decorations of the church attract devotees in huge numbers during Christmas and around the year as well. The church was elevated to the status of a Basilica in 1974 by Pope. 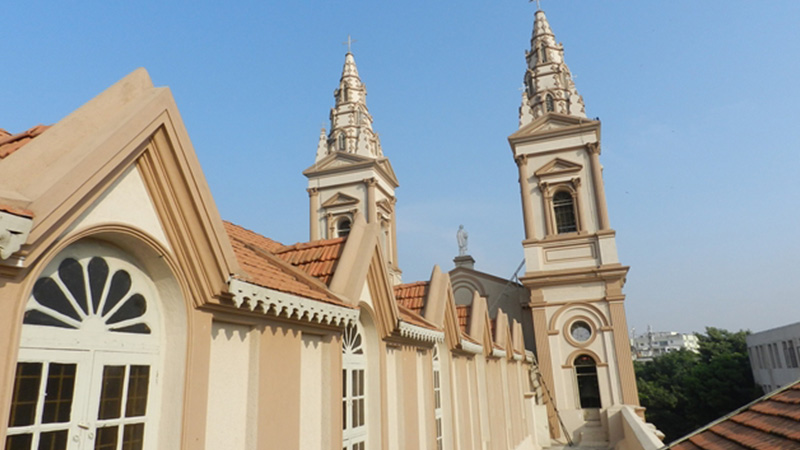 St Patricks church Image Credits : St Patricks church
Located in the heart of the town, St Patrick’s Church is a popular church that laid its stone in 1841 and was completed in 1844. The church was named by the Irish troops staying near the church, was originally dedicated to the Virgin Mary and Archangel Michael, and was marked as the ‘Church of the Assumptions’. The church was later renovated in the year 2000 and 2012 and now can accommodate more than 500 people. A century-old was beautifully restored in 2012 with the help of artisans from Nagarcoil, Tamil Nadu, to close to its original form. The Church attracts devotees and tourists to witness one of the best celebrations in the city.

Holy Trinity Church
There is a very less likely chance that you visit Bangalore and not visit the Holy Trinity Church. Strategically located in the CBD area of the fast-moving life of Bangalore, the church is yet another must-see in Karnataka. The Holy Trinity Church was built in 1851 for the British regiment stationed in Bangalore and is still regarded as the largest military church in Southern India. The spellbindingly brightened church during Christmas attracts devotees and tourists flocking to see the decoration and to attend the midnight masses. The church with an English Renaissance style of architecture can accommodate around 700 people at a time. The murals, statues, and artefacts of historic importance can be observed in the church. 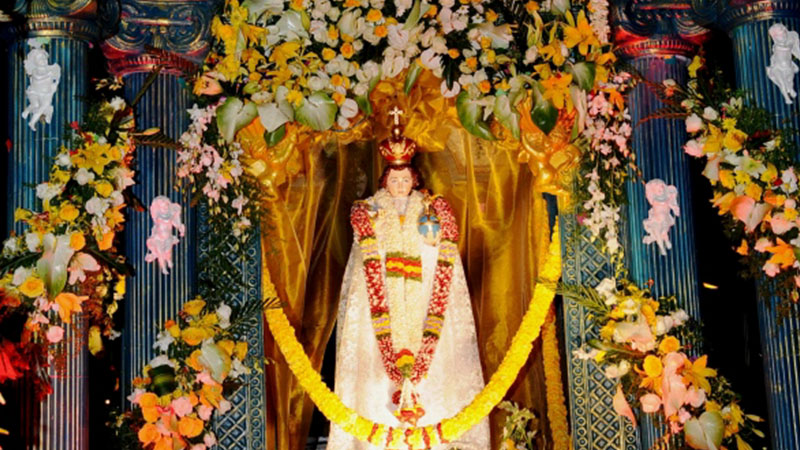 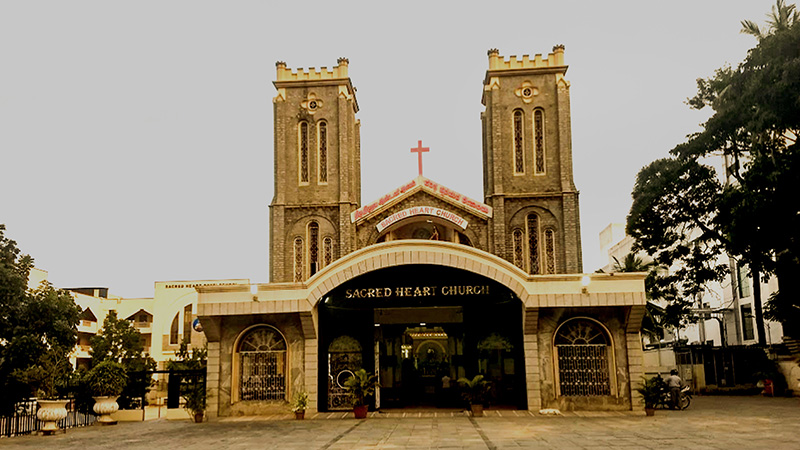 Our lady of the Sacred Heart Church, popularly known as the Sacred Heart Church in the heart of the town is a well-known religious landmark. A rare blend of Gothic and French architectural styles built in 1896, the church is amazingly beautiful with marble interiors, intricately sculpted statues, and exquisite pillars decorated with Corinthian-style carvings.
A visit to this church during Christmas is always special. Beautifully decorated with lights and stars, melodious carols, and a well-organized Mass makes this church one of the most popular churches in Karnataka.

One of the historical and heritage cities in Karnataka also possesses some of the most spectacular and popular churches in Karnataka. The cultural city of kings is quite famous for its exuberant Christmas celebration. 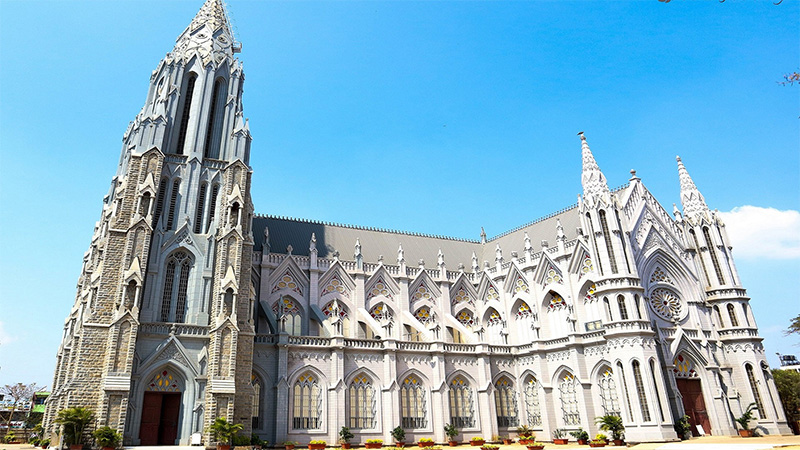 A spectacular Church is one of the must-visit churches in Mysore and is included in every tourist’s itinerary for its magnificence. The majestic church built in 1936 in the Neo-Gothic style of architecture is said to be one of the tallest churches in Asia and the second largest on the continent. The Christmas celebrations at the church are as grandeur and splendid as the city of Mysore is. The season of festivities is celebrated with street shows, live events, mass, and carols, and the décor and lighting invite and attracts devotees and tourists in huge numbers. 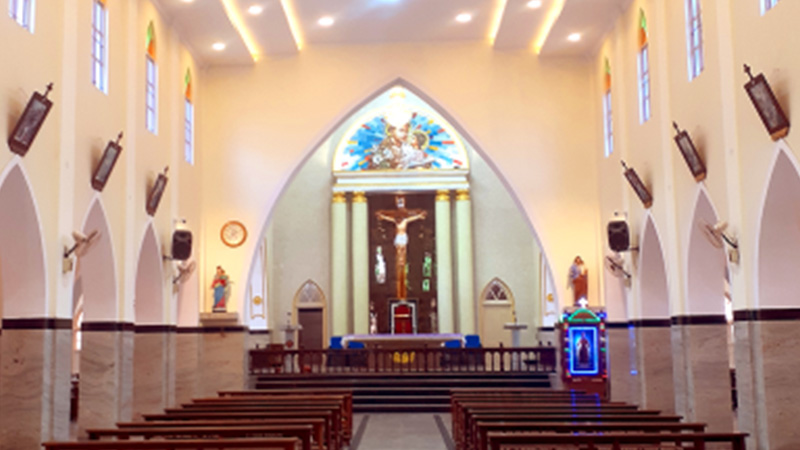 St. Antony’s BasilicaImage Credits : St. Antony’s Basilica
The beautiful shrine, St. Antony’s is dedicated to Saint Antony and is one of the famous churches in Karnataka. The church is believed to have miraculous powers and attracts not only devotees but also tourists. The splendid illumination attracts people for an extremely unique experience of the festive season. The other attractions include Perpetual Adoration Chapel, a stall offering rosaries, holy water, bracelets, key chains, etc.
Built-in 1920 as a small shrine, St Antony was later refurbished and restored in the year 1969. Later in the year 2019, the by blessings of the almighty, the church was granted the status of ‘Minor Basilica’ by His Holiness Pope Francis and was officially announced by Dr. K A William Bishop of Mysore in June 2020. It was indeed a matter of joy amongst devotees.

St. Bartholomew’s Church was built by the Madras Government for the East India Company troops stationed in the Kingdom of Mysore in the year 1832. This is one of the oldest churches in Karnataka as well as India. The church was named after Saint Bartholomew, one of the 12 apostles of Jesus Christ who is said to have visited India in the first century AD in some parts of present-day Maharashtra.
The church is known for its marble altar which was donated generously by Mysore Maharaja Wadiyar IV. The awestruck stained glass and teakwood panelling leave the visitors spellbound. The Christmas celebrations here are beyond words, the melodious carols accompanied by various live instruments and the cheerful and joyous vibes make a visit worth it.

The effect of Anglo- the Indian population in Mangalore, the city has many small and big churches and chapels. Christmas is celebrated in a very quaint and peaceful manner marking the birth of the ‘Son of God’.

Milagres Church – Church of Our Lady of Miracles 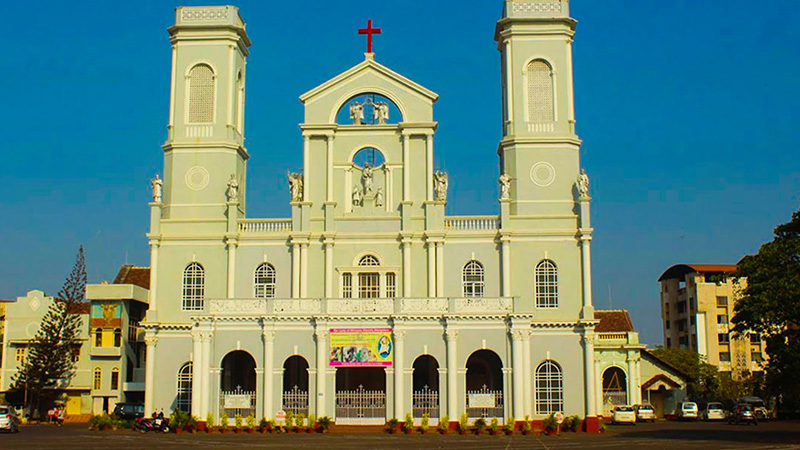 Milagres ChurchImage Credits : Milagres Church
Built in 1680 by Bishop Thomas De Castro, the Milagres Church is a Roman Catholic Church dedicated to Our Lady of Miracles. Located in the heart of the city of Mangalore, the church is said to be one of the oldest churches in the Dakshina Kannada district. Christmas is celebrated with great joy, cheerfulness, and delight. The spectacular decoration at the church attracts devotees to spend time meeting and greeting people and immersing in the bliss of festivities. 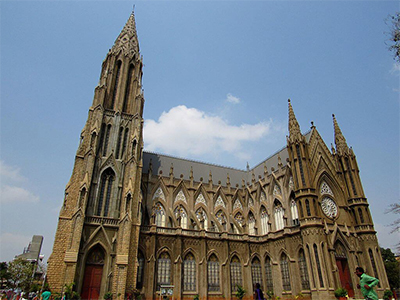 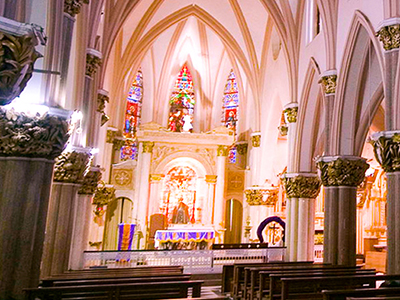 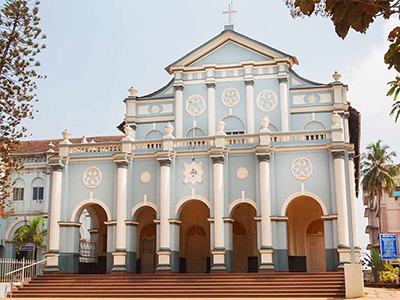 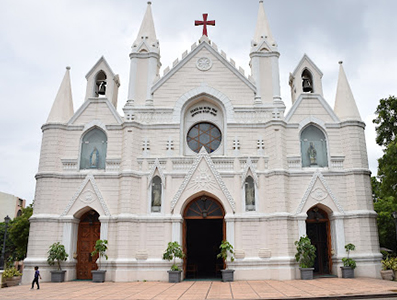 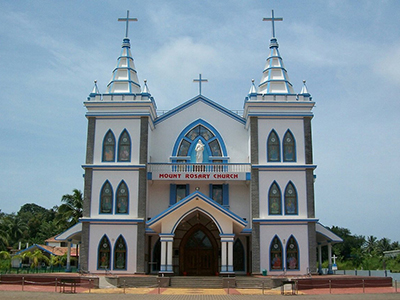