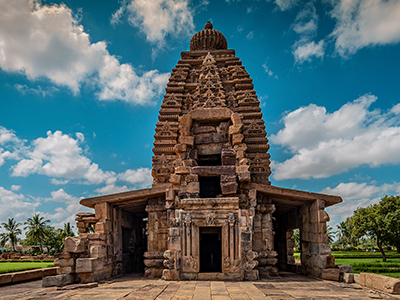 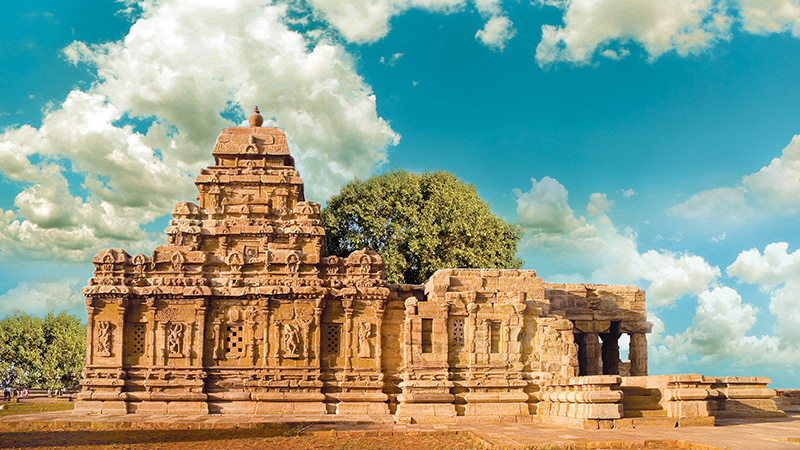 Originally called the Trailokeshwara Maha Saila Prasada, the grand Mallikarjuna Temple architecturally is almost like a twin of Virupaksha Temple. Nestled in the Pattadakal region, the temple was built by Queen Trailokya Mahadevi in 740 AD. This Shiva temple is now managed by the Archaeological Survey of India and is listed under the UNESCO World Heritage Site. Although it is a Shiva Temple, the inner walls depict the stories of Ramayana and Mahabharata. Mallikarjuna Temple is the epitome of architectural marvel and reflects the magic of ancient times.
For more information click here 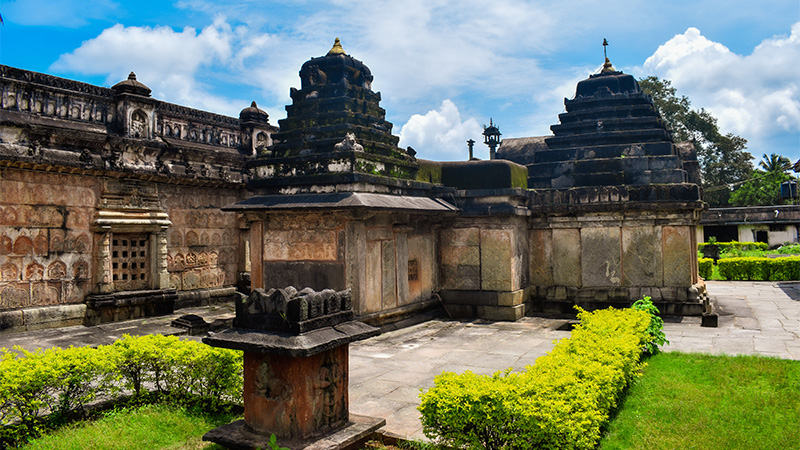 One of the oldest temples in Karnataka in one of the oldest cities of India, Banavasi this Shiva temple is of religious and historical significance. This is one of the most popular and must to visit temples in Karnataka, especially during the Maha Shivaratri festival. People who worship lord Shiva flock to the temple from across the country. As a mandate, this Shiva temple has a Nandi Bull statue too. The 7 feet tall monolithic Nandi here, is positioned in a way that its left eye appears to be looking at lord Shiva and the right eye towards Goddess Parvati. Another unique attraction that amazes people is the vertically sliced idol of Lord Ganesha. The other half of this stone idol is believed to be in Varanasi.

The temple can be best reached by road. The nearest railway station is Shimoga, which is 112 km and the nearest airport is Mangalore around 250 km. There are State-run road transport buses, private buses, and taxis from major cities of Karnataka. 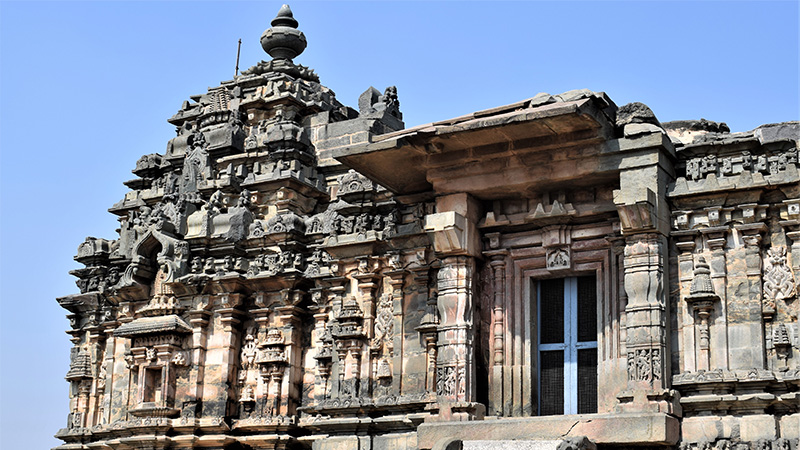 Another architectural marvel of the times, this 11th century Shiva temple in Gadag District is located in Lakkundi Village. The Chalukya style architectural, temple is now protected by the Archaeological Survey of India and is of national importance.

The temple is well connected by road, air, and rail. Hubballi is the nearest airport about 75 km and Gadag Junction is the closest and is 25 km away from the temple.
Temple timings: Morning 6:00 a.m. till evening 6:00 p.m.
For more information click here 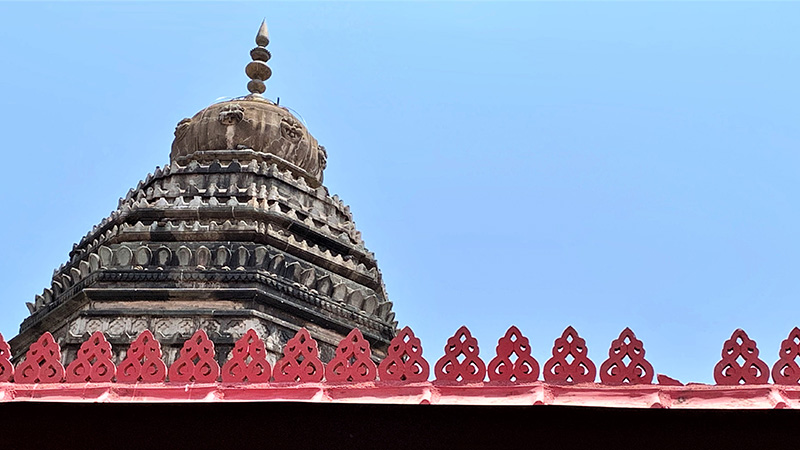 Often called Dakshina Kashi, Mahabaleshwar Temple in Gokarna and its Aatmalinga are as sacred as Kashi. Built in the 4th century, in the classical Dravidian style of architecture, this temple is a religious pilgrimage for Kannadigas. Mahabaleshwar Temple is one of the seven Mukti Stalas of Karnataka.
Devotees are allowed to enter the sanctum sanctorum, touch the Aatmalinga, and can perform Abhisheka or offering with their hands. One must take a holy dip in the Arabian Sea before entering the temple.
One of the five famous temples in Karnataka is Pancha Kshetras of Lord Shiva, the temple conducts a special Rath Yatra on the occasion of the Shivaratri festival. People from all over the country visit the temple during this festival.

One can reach the temple by road, rail, or by air. Geographically, the temple is in the Uttara Kannada district of Karnataka, the nearest airport is Panaji, Goa. The nearest railway station is Gokarna Road which is 6 km from the temple. Buses and other private vehicles can be hired to reach by road from Mangalore or any other part of the state.
Temple Timings: 6 a.m. to 12.30 p.m. & 5 p.m. – 8 p.m. The temple is open during the afternoon but people are not allowed to touch the Aatmaglina.

The Tuluveshwara temple is one of the 24 significant temples in Basrur. Even though there are just the remains of the temple, the Shiva Lingam in the temple is protected by the growing trees around it. The original temple is believed to date back to the 5th to 6 Century CE. However, the ruins today were built somewhere in 1400 CE. The local people have a lot of belief in the temple. They believe whatever they wish, it comes true. As always there is a small Nandi outside the temple.
It is an amazing sight to see how the Shivalinga is surrounded by the roots of an old tree and has not damaged the linga at all

The temple can be reached by road and is connected well to the towns and cities around Basrur. The nearest railway station is Kundapura, which is about 2 km. Kundapura station is a busy station and trains from other parts of Karnataka stop here. The nearest airport is Mangalore at a distance of about 97 km. 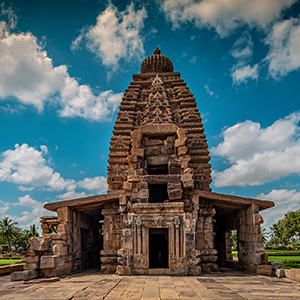 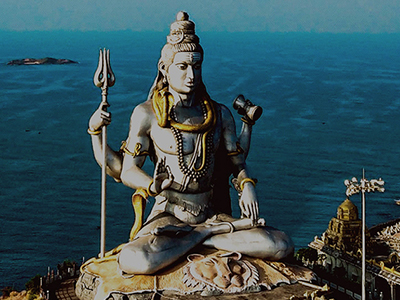 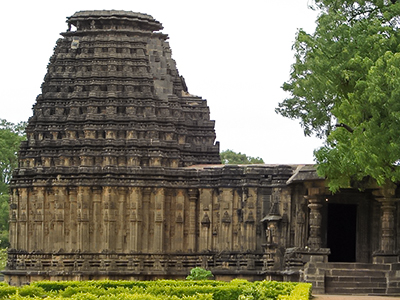 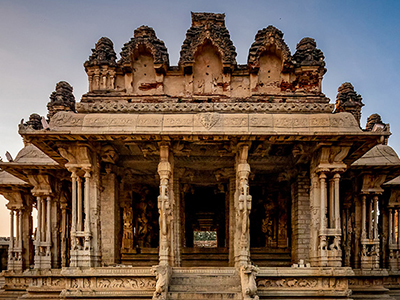 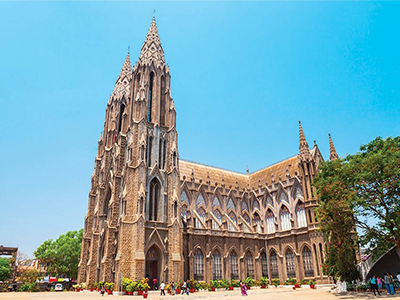 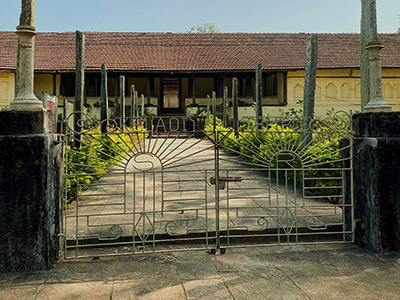