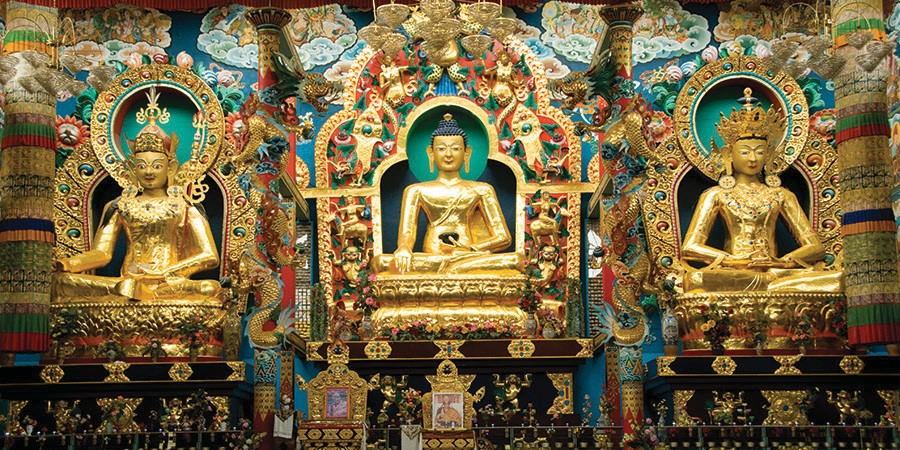 Divine Journeys: Pilgrimage can be extremely religious for some, while an exploration of spirituality for others. Both are perfectly well intentioned mindsets to take in a holy place. Karnataka, having been under the reign of different dynasties, and over the years growing into a predominantly secular state, has welcomed the influence of different religions and ways of life.
The state is home to monuments with the Buddhist inscriptions, carvings of Jain tirthankaras, and Arabic text, towering cathedrals and quaint churches, cave temples and seaside shrines, as well as mosques and dargahs.
While you are free to choose what you want to experience, an exploration of different beliefs is sure to give you a unique understanding of the history and culture of the place.
Hence we have curated a collection of pilgrimage destinations from different belief systems, spread across the length and breadth of the state that gives you a glimpse into its plurality and rich heritage.

One of the very few Sikh pilgrimage centres in south India, the Guru Nanak Jhira Sahib is situated in a splendid Gurudwara complex. A natural spring feeds the Sarovara (lake) built here. A Guru-ka-langar (community kitchen) provides free food to all visitors. According to a legend Guru Nanak, the famed social and religious Sikh reformer had visited Bidar while the land was in the grip of a famine. At the request of locals, Guru Nanak performed a miracle to bring about a spring of water from the laterite rock mountain. Till this day, crystal clear water flows from here.

This is an old Hindu temple dedicated to Lord Narasimha (an incarnation of Lord Vishnu). According to legends, Lord Narasimha after killing the demon Hiranyakashipu slew another one named Jharasura. As a dying request Jharasura requested Lord Narasimha to reside in his cave. Narasimha granted his last wish, and went into this cave. Devotees have to wade through chest-deep water for a glimpse of the deity carved on the wall of the cave. A good number of devotees visit this temple.

Completed in 1367, this grand mosque inside the Kalaburagi Fort is a delightfully well- preserved monument. Resembling the mosque at Cordoba in Spain, it covers an area of over 38,000 sq ft. This distinctive mosque which displays a strong Persian touch in its architecture, is supported on 140 pillars. It has 250 arches, 5 large domes and 63 smaller domes. Its interior surface is decorated with flowers and creepers.

This is the dargah of a sufi saint Khwaja Banda Nawaz who is believed to have lived in Gulbarga from 1407 to 1422. He wrote many works in Urdu and Persian. It is located amidst the innumerable small and large tombs in a spacious compound. The walls of this Dargah are decorated with verses from the Quran painted in gold, as well as paintings in Turkish and Iranian styles. Beside this is located the dargah of the saint’s son. In the library located nearby there are about 10,000 books on history, philosophy, religion etc in Urdu, Persian and Arabic languages. The annual Urus of the saint draws devotees from around the country.

The beautiful and ancient temple of goddess Renuka which is popularly known as the Yellamma Temple is situated atop a hill, and is at a distance of 70 kilometers from Belagavi and five kilometers from Saundatti. The temple built in the Chalukyan and Rashtrakuta style, has carvings of Jain Tirthankaras. Nearby, there are temples dedicated to Lord Ganesh, Lord Parashurama and Lord Kalabhairava. Apart from the locals, the devotees from Maharashtra, Goa and Andhra Pradesh regularly visit this shrine. The famous Yellamma Jatra (festival) held here is believed to be attended by around three lakh devotees.

Graceful arches, picturesque aisles, beautiful halls and a large crowning onion dome are the features of one of the prominent examples of Adil Shahi architecture – the Jamia Masjid. Even though magnificent, the structure is incomplete, as it lacks the two minarets. The Central mihrab (an arched recess in the interior walls), is covered with lines from the Holy Quran etched in exquisitely gilded calligraphy.

The seat of the Swami of the Vokkaliga community – Sri Adichunchanagiri Mahasamsthana Math, is a noted center of Bhairava worship. The temple is nestled among the hills. Lord Gangadhareshwara is the presiding deity here along with four other avatars (incarnations) of Lord Shiva namely Lord Malleshwara, Lord Kattale Someshwara, Lord Gavi Siddeshwara & Lord Chandramouleshwara. This temple complex also comprises other deities like Lord Ganapathi, Goddess Sthambhambika Devi, Lord Subramaneshwara, Goddess Mallamma Devi among others. A new Kalabhairaveshwara Temple is built here. The temple has a width of 18 feet and a total height of 21 feet. It consists of 128 pillars with well sculpted panels depicting different deities and their divine vehicles.

Murudeshwara, located on the main Mangalore- Karwar Highway, is sandwiched between the picturesque Western Ghats and the Arabian Sea. Its main attraction is the Shiva temple next to the beach, built in the Dravidian style of architecture along with a towering statue of Shiva. The temple, located on a hillock offers a magnificent view of the sea.

Shravanabelagola is home to the 18 meter high statue of Lord Gomateshwara; considered to be one of the world’s tallest free-standing monolithic statues. Constructed in 981 AD by Chamundaraya, a Ganga warrior, it is carved out of a single block of granite and looms atop the picturesque Vindhyagiri Hill. There are nearly 700 steps hewn in the rock-face which must be climbed to have a close-up view of this colossal structure. It is amazing to see so much grace and poise etched on a sculpture of such grand scale. The surrounding enclosures have images of all the Jain Tirthankaras.
Perhaps the most thrilling act of worship can be witnessed here during the renowned Maha Mastakabhisheka ceremony. Every 12 years, Jain pilgrims gather here to participate in the colourful Maha Mastakabhisheka of the Lord (head-anointing ceremony). From a specially erected scaffolding, priests and devotees pour hundreds of pots of curd, milk, honey, vermilion, coconut water, turmeric paste, and even gold and precious jewels over the statue’s head. The whole structure is awash in different colours which is a sight worth seeing. The most recent Maha Mastakabhisheka was held in 2018.

On the slopes of the Brahmagiri Hill, the Cauvery river emerges as a small spring. A ‘Kundike’ or rectangular pond and a small shrine mark this holy spot.
In mid-October, on Tula Sankramana day; the spring miraculously wells up and the water gushes over. According to legends, this is the time when goddess Ganga visits her sister goddess Cauvery. Thousands of devotees from across the country throng to the pool beside the temple to take a dip in the waters on this auspicious day.

Bylakuppe, is one of the largest Tibetan settlements in India. The Golden Temple of Namdroling, The Sakya Monastery – Sera Jey, and Sera Mey all display the distinctive architecture and colours of Tibet, and are home to hundreds of lamas or monks. The Tashi Lhnnpo monastery is the holy seat of the Panchen Lama, who is one of the highest dignitaries of Tibetan Buddhism. The Mahayana Buddhist University is located here which has an enormous prayer hall. A visit to Bylakuppe literally transports one to Tibet, with the sounds of prayer wheels, chiming of bells, and constant chanting of prayers.

One of the largest cathedrals in India, St. Philomena’s Cathedral in Mysuru is a remarkable example of Gothic architecture. The majestic church, built to honour the memory of Saint Philomena, a Latin Catholic saint of the Roman Catholic Church, draws inspiration from the beautiful Cologne Cathedral in Germany. Remains of St Philomena are preserved at the cathedral.