By Meenakshi Gupta
Bangalore city is popularly known as a Silicon City of India for its development in the last 2 decades in the IT sector and infrastructure. A modern posh city with the presence of most international brands has not lost its sheen of heritage. The heritage cluster of Bangalore still attracts many tourists from across the globe. Even the residents are always looking at exploring the heritage and history of the city. The concept of ‘Be a tourist in your own city’ holds good here. Heritage Tour in Bangalore takes you to the old-world charm and the rich heritage and history of the state.
The authentic food trails and places of heritage and traditional values in Bangalore will leave you in awe. The age-old history, be it a temple or a monument or even an authentic old joint to eat those authentic masala Dosa and Idly-Vada is something you will relish and will recommend to everyone coming to the city. Popular with writers, film producers, directors, actors, politicians, and even the students residing in the area, this 60-plus-year-old New Modern Hotel in Sheshadripuram has maintained its authentic, delectable taste and the quality of south Indian breakfast they serve. The lip-smacking Badam Halwa served only on weekends gets over in no time.

An architectural marvel, estimated to have been built in the year 1537 by the founder of Bengaluru, Kempe Gowda. The temple dedicated to Nandi is carved from a single granite stone and is a spectacular piece of art. Nandi is a devotee of Lord Shiva. There is a unique Lord Ganesha idol on the temple premises that will surprise you. As a ceremony, every four years an idol of Lord Ganesha is made using approximately 110 kg of Ghee ( clarified butter). At the end of the fourth year, this butter is distributed among devotees. The amazing fact is that the butter never melts in its four years cycle, not even once. The temple is an excellent site for pilgrims, history buffs, and those who love to study architecture and archaeology. The temple carved out of a monolithic rock dedicated to Lord Shiva is one of the most visited heritage temples in Bangalore. An architectural wonder is believed to have been built in the 9th century and later was revamped by ruler Kempe Gowda in the 16th Century. The inner sanctum of the temple is built in such a way, that on the day of Makar Sankranti the sun rays pass through the horns of the stone bull and fall on the shrine illuminating it for nearly 10 mins. The unique structure is adorned with a granite moon, a stone umbrella, monolith sun-discs, and three cave passages. Pilgrims not only flock to the temple on Sankranti day but throughout the year. 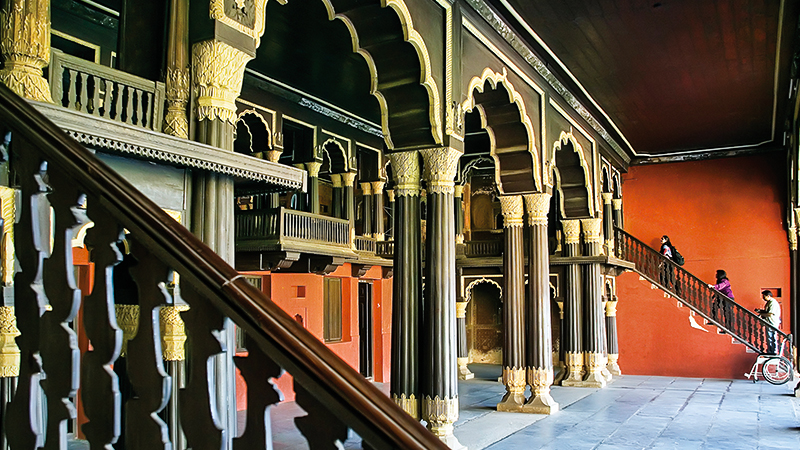 revamped by ruler Kempe Gowda in the 16th Century. The inner sanctum of the temple is built in such a way, that on the day of Makar Sankranti the sun rays pass through the horns of the stone bull and fall on the shrine illuminating it for nearly 10 mins. The unique structure is adorned with a granite moon, a stone umbrella, monolith sun-discs, and three cave passages. Pilgrims not only flock to the temple on Sankranti day but throughout the year.
You cannot afford to miss this historical palace when in Bangalore. Also known as Tipu Sultan’s summer retreat, the palace was built in 1791 and is a marvelous example of Indo-Islamic architecture. The construction of the palace was started by Nawab Haider Ali in 1781 and was completed by Tipu Sultan in the year 1791. After the death of Tipu Sultan, British Administration used the palace as its Secretariat before moving to Attara Kacheri in 1868. Located in the heart of old Bangalore near Kalasipalyam, the palace is a famous tourist spot and is maintained by The Archaeology Survey of India. The palace is now converted into a museum and showcases clothes, crowns, vessels, etc of Tipu Sultan and Haider Ali.
Visiting time – 8.30 am to 5.30 pm on all days Dedicated to Lord Shiva, Bhoga Nandeeshwara Temple is located on the outskirts of Bangalore in Nandi Village near the famous Nandi Hills. A great specimen of South Indian temple architecture was originally built by Nolamba Dynasty in the 9th century. Later rulers of Ganga, Chola, Hoysala and Vijayanagara dynasties contributed to making this unique architectural marvel. The great sculptures and intricate carvings of gods, animals, characters from ancient stories, sages, and stories and scenes are depicted from Hindu Mythology on the walls of the temple. A beautiful water tank inside the temple premises is another highlight of the temple, not to be missed. The temple is maintained by the Archaeology department and is just 60 km from Bangalore. Temple is open from 8 am till 6 pm. An iconic and symbolic to Bangalore is the Bangalore Palace which attracts tourists from all over the world. One of the prime attractions of the city, the palace is a quintessential example of royal opulence. The palace takes you into the regal lifestyle and the grandeur of the Royal family of Mysore, the Wadiyar. The construction of the palace started in 1874 and ended in 1878 by the British guardians of young Maharaja Chamrajendra Wadiyar X for his stay. Spread across 454 acres and a built-up area of 45000 sq ft, this sprawling palace is built in the Tudor Revival style of architecture. An interesting blend of colonial, Victorian, and Indian heritage makes the palace worth a visit.
An extravagantly adorned Durbar Hall with a huge elephant is the highlight of the palace. Another key attraction of the palace is the extensive collection of Raja Ravi Varma’s paintings. The palace is also abode to many other paintings from the 19th and 20th centuries making it a must-visit place for art-lovers apart from the tourist’s must-do place. The palace was made open to the public in 2005. Visiting timings are 10 am till 5.30 pm.
A visit to Bangalore will be incomplete without visiting these heritage places with the rich and historic culture of Karnataka.

Must Visit Treks During Karnataka Monsoons

Tannirbhavi Beach
0
0
Blog
Screen Reader A- A A+